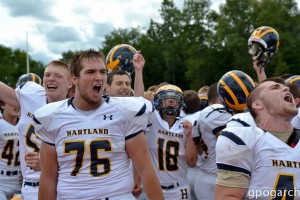 BRIGHTON – In age of spread offenses so complicated that both teams signal plays in and players look at armbands to know what they have to do, Friday’s Hartland team showed the beauty of simplicity.

It didn’t get much more simple than this for the Eagles: Give the ball to Zach Messner and get out of the way.

The Hartland senior stepped in when Ryan McRobb aggravated an injury and never stepped out, rushing 27 times for 113 yards as the Eagles beat Brighton 24-7.

The win puts Hartland (5-1 overall, 3-1 KLAA West) in position to win a share of the West Division next week, when the Eagles play host to first-place Grand Blanc.

To get there, however, the Eagles took advantage again of turnovers. Last week, Hartland scored three times off Pinckney miscues, and the Eagles scored twice more on Brighton turnovers on Friday.

“If you have turnovers, it’s hard to beat anyone,” Brighton coach Cliff Kiefer said. “But especially against a solid team like that.”

Meanwhile, Hartland’s offensive and defensive lines pounded away. The Eagles rushed 57 times for 250 yards in all, only three of them for more than 10 yards.

“They won in the trenches,” Kiefer said. “They did a great job up front and took advantage of our mistakes.”

The Eagles punted only once on the night, and missed two field goals.

Noah Marshall, who scored two plays later to give Hartland a lead it would not relinquish, smiled when asked how he liked having extra weapons to work with.

“It takes a little stress off me and the team,” he said, grinning, “to give him the ball and keep pounding away.”

Messner got started right away. Following Marshall’s touchdown, the Bulldogs coughed up the ball when Zach Vitkuske fumbled deep in Brighton territory. Five Messner carries later, his touchdown gave the Eagles a 14-0 lead. 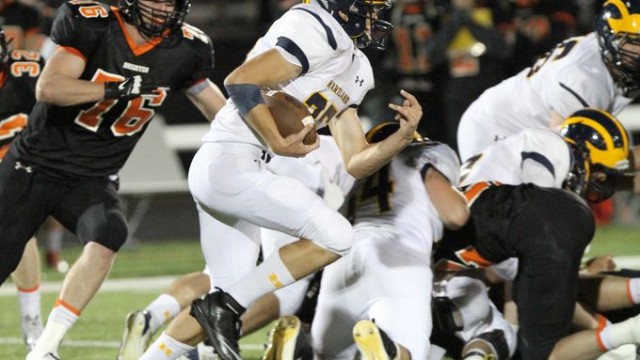 Brighton drove to the Hartland 25 on its next possession before the drive stalled, putting the Eagles on their own 13.

The Eagles drove 78 yards before Spencer Hayes made it 17-0 with a 26-yard field goal with 3 seconds left in the half.

“It was a key to keep them out of the end zone,” Kiefer said. “We didn’t want to go into the half down three touchdowns. That was a huge positive for us.”

But the Eagles got the ball to start the second half and put on another time-consuming drive, burning six minutes off the clock before turning the ball over after a missed field goal.

This time the Bulldogs were able to move the ball, putting together an 80-yard drive in 13 plays, helped by an interference call against the Eagles, before Nick Brish put Brighton on the scoreboard with a 3-yard run.

But Brighton’s next possession ended in Brett Oliver’s interception of a Grant Dunatchik pass early in the fourth quarter.

This time, Hartland played stop-him-if-you-can, giving Messner the ball 11 times in a 13-play, 67-yard drive that burned nearly seven minutes and ended with Messner’s last score of the night, a 4-yard run that put the game out of reach for Hartland.

“It was a bit ridiculous at the end,” Messner said, “but I was glad to get it, especially when they started getting nasty with me. I was happy to get that last touchdown.”

Brighton can reach they playoffs by winning its final three games, but Brish was in no mood to think that far ahead.

“We’re trying to go one game at a time, because we’ve got our biggest rivals coming up in Howell,” he said. “They’re right at you. They’re coming to get you and we’ve got to be ready to play ball. W have to come out and play good football.”

Meanwhile, the Eagles were savoring what they had just done and were looking forward to what awaits.

“The last time we played them on a homecoming it was ours, and we lost to them pretty big,” Messner said. “It was quite upsetting. It felt really good to come out here and crush them for once.”

As for Grand Blanc, “that’s the beauty of football,” said Marshall, who had 15 carries for 63 yards. “There are only nine games, and you have to do your best every single week. Every week’s a big one, and I think we’ll be ready for it.”

Direct Link to the Press & Argus