The Hartland Varsity Boys team rose to the top of their KLAA division for the second year in a row.  Great job, guys! 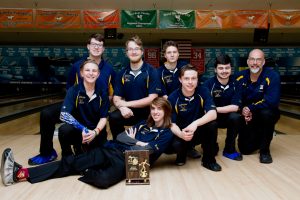 The season had a rocky start.  The KLAA was reshuffled and reduced to two divisions down from three last year.  As a result, the schedule shrunk from 15 games to 10.  Hartland is in the Gold Division along with Brighton, Howell, Grand Blanc, Northville and Novi.  The Varsity Boys team lost their first three crossover games but then went undefeated the remainder of the season, finishing 5-0 within their division and 7-3 overall.

The Varsity Girls team finished second in the Gold Division, with a 4-1 division record and 6-4 overall record.  The Junior Varsity girls were at the top of the JV Gold division, also for the second year.  They also had a 3-2 division record and a 6-4 overall record.  While the JV boys’ team took the most points in their division, they finished third:  3-2 within their division and 8-2 overall.

The division trophy was awarded Friday at the KLAA Conference Tournament.  Medals were also awarded for high average to the top fifteen.  For the boys, Michael Barlette came in at number 12 with a 198.67.  Evan Griffin was number 10 with 199.53.  Noah McClure was number 7 with 202.07.  On the girl’s side, Michelle Thompson was number two with 185.50.  Congratulations! 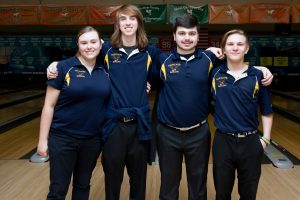 The conference tournament consisted of six baker games, then two individual games.  Top eight moved on to head to head baker games, best two of three.  Both Varsity teams made the cut, and both were knocked out in the first round.  The Boys fell to Wayne Memorial in two straight games.  The Girls fell to Salem, tying the first game but losing the next two.  Shake it off, teams!  Regionals take place on Friday, February 23rd and Saturday, February 24th. You’ve got this!  Go Eagles!!!