Varsity bowlers Haley Hebel and Devin Guibord each earned an individual medal at the first bowling event of the 2019-2020 season!  The Hartland Bowling program kicked off season at the Richard Hochstein Memorial Scholarship Invitational at Wonderland Lanes in Commerce Township on Sunday, December 8th.

The tournament format consisted of three individual games and four baker games to qualify for match play.  The top eight teams moved on.  Before match play began, individual medals were awarded for the highest ten games and for the top ten series.

For Varsity Girls, Haley Hebel earned a medal for the 9th highest girl’s game, with a 202.  Way to go, Haley! 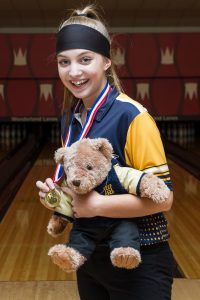 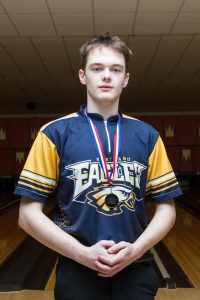 During the qualifying round, the Varsity Boys’ first individual game totaled a lofty 1005, with Captain Riley Griffin throwing the high game with 212.  Captain Devin Guibord had the high score in the second game with a 226 and in the third game with 214.  Bowler Ethan Zaborowski also had a strong day with a 618 series.  The boys made the cut, seeded seventh, but unfortunately were knocked out by Canton in the first round.

For Varsity girls, Haley Hebel had the medal winning high game in the first game with her 202.  In game two, Savanna Gregory led with a 183. And in the final game, Morgan Maliszewski took top honors with a 167.  The girls also made the cut, also seeded seventh, and also were eliminated in the first round by Salem.

It was a great start for the program!  The first match of the season is tomorrow at Super Bowl in Canton with a crossover against Stevenson.  Go Eagles!!!